Posted on 15 February 2014 by blackandblueman

About 10-15 minutes after my last break I approached the Gladesville Bridge, one of Sydney’s major bridges.

But as I drew closer, a problem emerged.

It seemed that a pedestrian footpath didn’t lead onto the bridge but instead came to an end at the bottom of the hill underneath it.

I consulted the Sydney Walker app and looked about.

I also looked up at where traffic was rushing onto the bridge. From what I could see, it appeared that there was a gap between the traffic and the bridge’s railing that looked wide enough for a footpath.

But how the heck would I get up there?

Later, when I consulted a more detailed map, I would discover that if I had followed the footpath to the bridge to its end down on Huntleys Point Road and taken a short walk down the road, I would have come to another footpath that wound its way up to the bridge.

Instead, I decided to brave my way across one of the nearby busy exit roads from the bridge and clamber up a short but steep hillside to where the bridge began.

I did that without any mishap and finally got to where the footpath began on the bridge, but during that I discovered part of that other footpath that wound its way up from Huntleys Point Road.

No matter, though. It had taken another 10 minutes or so to make it onto the bridge, but I was finally there and that was all that mattered.

While I had been standing on the hillside under the Gladesville Bridge, I saw a sight similar to the one in the following photograph. 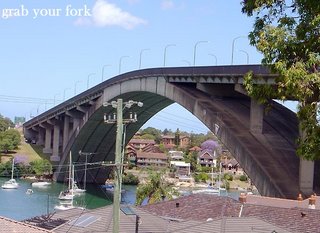 What I saw amazed me, and made me appreciate just how big and high the Gladesville Bridge is.

About 10 minutes later, though, that amazing sight would have an unexpected impact.

I began walking up onto the bridge.

I glanced through the high external railing at the Parramatta River far below, and similar to the following photograph I saw another amazing sight that made me appreciate again just how big and high the Gladesville Bridge is. 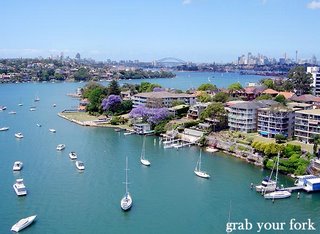 A constant wind was blowing, quite hard.

I looked ahead and, yet again, up close it was amazing to see just how high the bridge curved upwards…

Suddenly, a very hard gust of wind almost tore my hat from my head.

Just in time, I clamped my left arm upon my head and saved my hat.

And then something completely unexpected happened.

The sights I’d just seen similar to the above two photographs combined with my fear of heights and my OCD, and altogether they wouldn’t let go of me.

A fearful voice from the back of my mind said, I cannot cross this bridge.

And I came to a halt.

For the next minute or so, I stood there and debated mentally and furiously with myself.

Part of me didn’t want to go across the bridge.

Another part of me scolded that reluctant part.

Yet another part began thinking of alternatives, like back-tracking to a bus-stop or locating a nearby ferry-wharf…

…but despite being frozen in place by my fear, I ultimately decided that I wanted to cross the bridge.

No – I had to cross the bridge.

I studied my immediate surroundings again, which looked similar to the following. 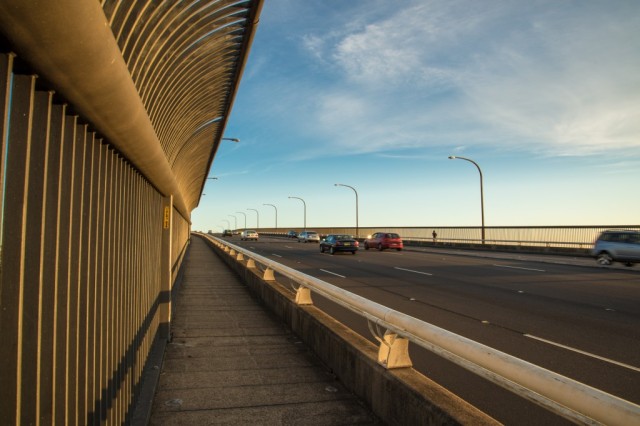 To the left is the high external railing that looks out over the Parramatta River far below. I could keep my head down and continue walking near it (keeping left as a pedestrian in Australia is considered best practice), but there was still a good chance I would constantly see what I didn’t want to see…

…but there was also that low white internal railing to the right.

I went over to it, put my right hand around it, and started feeling better.

Now I knew how I could get across the bridge.

I would keep right, and keep my hand on that railing…

…but then another worrying thought came to mind.

What if someone on a bicycle was coming the other way, or from behind? They would have to go around me –

– and that prompted a mental scream of OH, FOR FUCK’S SAKE! THEY CAN GO AROUND ME!

Angry and ashamed and frightened, I began walking.

For the next ten minutes or so, I hurried over the Gladesville Bridge.

I looked down at the concrete footpath, kept my right hand on the white railing, kept my left arm clamped over my hat and head, and moved as fast as I could.

As I passed over the top of the bridge and began my descent towards Drummoyne, I looked up more towards the reassuring sight of land but kept my right hand on the white railing.

Finally, I finished crossing the bridge.

Ahead, Victoria Road rose on a long steep slope to downtown Drummoyne.

Despite that uninspiring sight, and still being shaken by what I’d just experienced, I continued walking.