Posted on 11 January 2016 by blackandblueman

And there was another big task for August – building a Lego display for Canberra Brick Expo 2015, at month’s end. 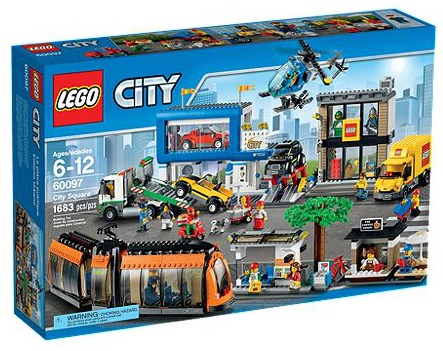 A few months before, I had gotten excited about the big new 60097 City Square set, pictured above. Originally I had planned to buy two of them and combine them into a larger My Own Creation (MOC)…and then it became three sets…and finally I decided to splurge and get four sets. After all, I now had the money to buy $1000 of Lego in one hit…and I would eventually get a new job, wouldn’t I?

And what made this situation even more exciting was having to wait – the City Square set wasn’t available until 1 July. If I bought it online, that is – the set wasn’t due to reach Australian stores until late August or early September, which would be too late for Canberra Brick Expo 2015.

And in the weeks leading up to 1 July, what made this situation even more and more exciting was the prospect of maybe getting that job in Chatswood (see Part 4). Not only would getting that job provide greater justification for spending $1000 in one hit on Lego, but it would also be a nice celebratory present for myself.

But after going to the 17 June interview and being told that that a final decision was weeks away, I knew that I would have to buy my Lego as soon as possible after 1 July, to allow for two or more weeks’ shipping time from Europe.

I waited a little longer after 1 July in the hope that a decision about the job might be made earlier.

On Monday 13 July, I finally got word about coming “VERY close” but not quite for the job.

And just over two weeks later, my Lego arrived.

And for the next few weeks after, I spent a lot of time enjoying myself as I built my way through those four big sets. There were some creative stumbles along the way, of course, but once again like in April I had the time to afford them (see Part 3).

From time to time there was a little concern about having spent so much money without having a job, but mostly I didn’t regret it.

Meanwhile in early August as I began building, I was contacted by another recruiter via LinkedIn.

This recruiter was a colleague of the recruiter who had rung me when I had visited the zoo a few weeks before (see Part 4). He was based in Melbourne, but he also looked after opportunities in Sydney and Canberra.

On Friday 14 August we spoke on the ‘phone, and he suggested that we also meet via Skype. After that, via email, we arranged to Skype on the morning of Monday 17 August.

So I installed Skype, went out and bought a pair of headphones with a microphone, and wondered: what should I wear to our meet on Skype?

It wasn’t a formal job interview, more of a get-to-know-each-other chat…but even so, would it still be prudent to wear a business shirt and tie?

I thought about it over the weekend, and on Monday not long before our meeting I finally decided that, although I did shower and shave, I would only wear one of my best polo shirts. To me, “dressing up” felt like overdoing it.

A couple of hours later, our meeting went well. He was very pleasant to talk to (and wearing a business shirt and tie), and we even had a couple of laughs.

Nothing definite came out of it, but there was some hope.

Like my getting to the interview stage with the job in Chatswood…yikes, two months ago to the day now, it was another step closer towards getting a job.

Soon, the end of August arrived.

I carefully packed my display and other stuff into two suitcases, and once again headed down to Central Station for another 8:00am Greyhound for Canberra – to find that Greyhound now offered wi-fi and USB ports on their coaches, which made that pleasant familiar journey even better.

What also made the prospect of this visit to even better was that, unlike some unexpected financial restrictions that had placed a cloud over last year’s visit, this time money wouldn’t be an issue.

No, I wasn’t planning on going stupid – but it would be great to relax and know that money wasn’t something I had to worry about.

And relax I did…enough, in fact, to spend around $70 in a way that I never thought I would ever do.

On set-up day at the Canberra Brick Expo 2015 venue in Woden, I finished putting together my display earlier than expected, so I thought that there might be time to visit one of my all-time favourite Canberra haunts – Clouston & Hall Booksellers in Civic.

So I looked them up online to check their hours of business…and I was stunned to find that they had closed their Civic doors only a couple of months before.

I was stunned…but soon relieved to find that their Fyshwick warehouse was still open.

Okay, so Fyshwick was a little out of the way for a Woden-staying car-less bibliophile like me, but it was reachable by bus…even if it was about an hour each way, but it would be worth the whole round-trip…

…yet the next day, when I made my way to Fyshwick and back, I went by taxi instead. Which only took about 15-20 minutes each way, but cost about $35 both times.

Looking back now, I can’t remember when I made the decision to go by taxi instead of by bus, but I don’t regret it.

And I was out at Fyshwick for over two glorious hours, patiently making my way around the huge warehouse-store (it was a booklover’s paradise, indeed) and making a long list of books to perhaps buy from Amazon.

Yes, part of me felt slack for doing that showrooming once again. That is not the fault of Clouston & Hall Booksellers, however – their range is great and their prices are very good (and, in almost all cases I’ve found since 2011, comparable to what I pay on Amazon – and sometimes better). The reasons I once again showroomed that day was that, since 2011, ebooks suit me much better for portability and reducing hoarding.

As for Canberra Brick Expo 2015, it was yet another fun occasion to see the amazing work of other Lego fans, and also meet up with Adult Fans Of Lego (AFOLs) from Sydney, Canberra and Melbourne. I had a great time.

There was another Lego show coming up, this time at the iconic David Jones department store in the Sydney CBD. Fortunately it was only 20 minutes or so away by foot, and I would mostly be reusing my Canberra Brick Expo 2015 display (but with some additions that I hadn’t been able to include down there) so I didn’t have to worry so much about building in time for the show.

And then suddenly, something else happened.

In doing my research for this post, I found that – amazingly – I didn’t record on what day it took place or who it was who called me – the first recruiter who had called me at the zoo in July, or his colleague who I’d Skyped with in August.

But whoever it was, and on whatever day it was, I got a call offering a job opportunity that had unexpectedly come up in Canberra.

It was only a two-month contract.

But it was right in Civic, which was very appealing.

And it was working with a federal government client, which I was interested in doing.

And it would pay the hourly rate I had decided to charge – unlike any of the previous contracting jobs I’d applied for or been contacted about in Sydney during the previous five months.

And most of all, it was a job and I could start leaving alone my redundancy money.

I said yes without hesitation…

…even though my first week of work would also be the week of the Lego show at David Jones.

That wasn’t a problem in that I could still set up my display on the preceding weekend, but it did mean that (a) I couldn’t help out at the show during the week and (b) on the following weekend I would have to return to Sydney, dismantle my display and head back to Canberra.

But life is what happens when you make plans 🙂

And during that last week in Sydney before my new job would begin, things moved very busily.

There were several days of email traffic and completing paperwork, including having to suddenly one day get someone’s signature – but fortunately, one of the few neighbours I knew in my building was in that morning.

My new employer helped me book most of my upcoming accommodation in Civic, at a place I was unfamiliar with called Quest Canberra. Because Floriade 2015 was in full swing and Canberra was filled with visitors, I couldn’t get a full eight weeks at Quest Canberra so the first week would have to be elsewhere…so I gritted my teeth and booked an expensive stay at Novotel Canberra. Despite that upcoming big cost, however, I was excited – I would be spending a couple of months in hotels; I like Novotel Canberra; I could eventually claim my stay back on tax (I hoped); and I was looking forward to seeing what Quest Canberra would be like.

I made another trip to the store where I’d bought my suit back in May, and loaded up with more shirts and ties.

On Friday 18 September, I wheeled two Lego-filled suitcases down to David Jones and spent a few hours setting up my display and helping out with other stuff.

On Saturday 19 September, I returned to David Jones to keep an eye on my display and nearby ones by my colleagues.

Very early on Sunday 20 September, I got up and packed for the week ahead.

Less than two hours later, I was once again down at Central Station boarding another 8:00am Greyhound for Canberra.

I was nervous about what could lay ahead during the next five days, and beyond that the following seven weeks – but I was mostly excited about returning to Canberra for the next two months.

And that, I told myself, would help me to keep calm and carry on, and take my new situation one day at a time at one hour at a time.