Posted on 31 January 2016 by blackandblueman 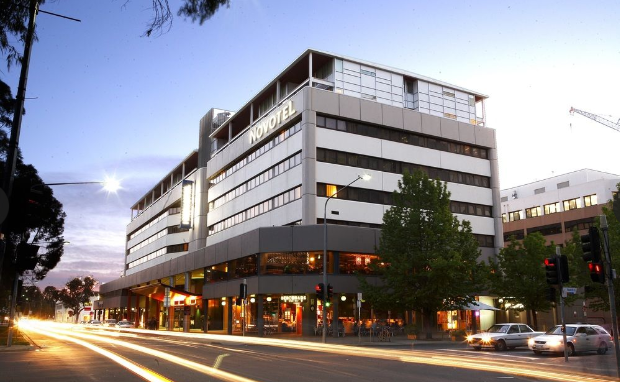 Once again, I arrived via Greyhound at Canberra’s Jolimont Centre just after noon. It was a nice pleasant day in Civic.

Soon I was at the nearby King O’Malley’s pub, sitting down to my ritual ‘arrival lunch’ of a Mexican King pizza and jug of diet cola.

About two hours later, I checked in at Novotel Canberra to find that I had been given a cozy room for the next five nights.

My room at Novotel Canberra looked similar to this (accorhotels.com.au)

But overall, despite some apprehension about what might lie ahead, I was happy and hopeful.

Next, I did something that I also don’t like doing early in the morning – have breakfast. Well, it was barely breakfast – just a cup of yoghurt washed down with some chocolate milk. Still, I thought that whatever lay ahead, I would need more energy than what I got from my usual glass of chocolate milk (although I usually didn’t drink that until after 9am, when I had usually gotten up for the past few years).

I packed for work, showered, shaved, dressed and hoped that the day ahead would go well.

Barely 10 minutes later, after a short work across Northbourne Avenue and north up a nearby street, I was standing in the lobby of the building where I would be working for the next two months.

One ‘phone call later, I was met by a pleasant young woman called Rebecca.

By 9am, I was seated at a desk and starting to set myself up.

Suddenly at 9:30am, Rebecca asked me to accompany her to a workshop that was about to begin on another floor.

I spent the next day and a half at that workshop writing as many notes as I could about a process that needed updating.

And after the workshop finished, my next task was to illustrate that updated process with Microsoft Visio.

It was just like being back at my previous employer.

I was greatly relieved, and even happy – my experience and skills were still valid, and drawing flowcharts in Microsoft Visio is (mostly) fun.

The week before back in Sydney, the agency who’d hired me had told me to show up for work in a full suit.

Thus, because I still only had one tie, I went and bought four more. Although one voice at the back of my mind suggested that I could wait to see if my job required ties every day, I typically fretted that I may not get an opportunity to buy more ties in Canberra during work hours, so I loaded up in Sydney.

That first day of work, I saw only one other person wearing a tie.

I asked Rebecca if I had to keep wearing one, and she said it wasn’t compulsory.

And that day became the first and last time I would wear a tie to work in Canberra.

There was another item in my new work wardrobe that I would stop wearing as well, although it would take me a couple of weeks before I replaced it.

Having to wear a suit didn’t bother me, but I quickly came to dislike my jacket.

One reason I didn’t like my jacket was that the feel of padded shoulders drove me nuts.

But most of all, I couldn’t stand how useless my jacket was.

Yes, I mostly wear L.L. Bean travel vests festooned with pockets that I fill with all sorts of items I think I may need (and often use) – and, yes, I appreciate that a suit’s jacket is a different type of garment altogether, and that I don’t need to carry around pockets of gear all of the time…

…but, along with those blasted shoulder pads, I couldn’t stand how the jacket’s pockets were barely able to hold my iPhone and wallet.

As well, the jacket felt flimsy.

So a couple of weeks later, I decided to switch back to my travel vests.

No one said a thing, so I kept on wearing them.

It felt much better, and right.

As well as the welcome familiarity of the work I was starting to do, another factor that I liked about that first week in Canberra – and would come to like more and more in the weeks ahead – were the people.

Like Rebecca, they were easy-going and pleasant to deal with.

As well, they were very helpful – especially other contractors I met, who provided very useful advice about the contracting life.

For a timid introvert like myself, I couldn’t have asked for a better environment to begin a new job in.

That first week passed, and the beginning of what would become a series of routines during the next weeks emerged:

It was all starting to come together quite well.

I was greatly relieved.

On the morning of Friday 25 September, I checked out of the Novotel and wheeled my luggage to the office.

By 6pm that evening, I was back at King O’Malley’s, this time having a Pepperoni pizza for dinner and enjoying the ambiance of a Friday night in Civic. Part of me was a little disappointed that I had to spend that night travelling back to Sydney, but I had several more opportunities for Friday nights in Civic ahead.

By 9pm I was back at the Jolimont Centre to board a Greyhound back home.

And just after midnight, I was back there.

It was back to David Jones to man my display at the Lego show, and help out elsewhere where needed. Apart from the usual small number of ratbag parents and children, it was good fun once again.

At day’s end I packed up my Lego and wheeled it all home.

While at the show I’d also bought more Lego, with the idea of taking it back to Canberra with me and spending some of my spare time over the next seven weeks building more MOCs.

And of course, I could buy even more Lego while I was down there – especially now that I was earning an income again.

Canberra was looking better and better.

Once again it was back to Central for another 8:00am Greyhound to Canberra.

Shortly after noon, it was also back to King O’Malleys for another Mexican King pizza and diet cola.

But this time at 2pm, I headed to Quest Canberra at 28 West Row in the historic Melbourne Building, which is a very short walk from the Jolimont Centre and the Novotel. 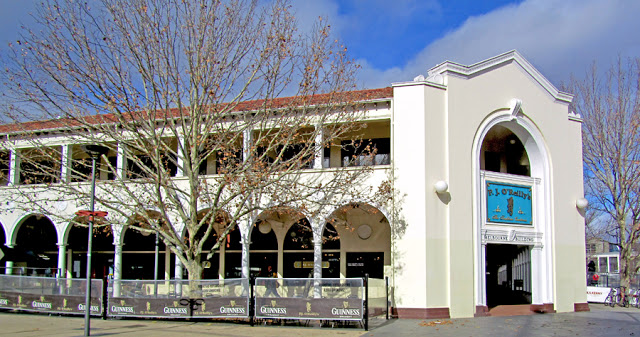 The north-west corner of the Melbourne Building, Civic ACT (http://dailyphotocanberra.blogspot.com.au/2011/06/melbourne-building.html)

The idea of staying at a hotel in the Melbourne Building was intriguing – and as I approached Quest Canberra, I was also pleased by the number of restaurants that were on the north and west sides of the Melbourne alone.

The lobby of Quest Canberra was also pleasing, with its blend of the Melbourne’s original 1920s styling and the present day.

The young man who checked me in – and who, along with his colleagues, would become a very familiar face in the weeks to come – was also very pleasant. It was amusing to see him do a double-take when he saw how long I was going to be staying.

And soon after, I was very pleased with my new temporary home.

An example of a one-bedroom apartment at Quest Canberra, Civic ACT (questapartments.com.au)

I had been given the equivalent of a one-room apartment that was about three times the size of my studio apartment in Sydney (and last week’s room at the Novotel).

I couldn’t believe it.

I was going to be living in a great-looking hotel apartment for the next seven weeks (or so I thought) in the centre of one of my favourite cities, with my workplace and pretty much everything else I needed (and more, as I would soon discover) within a 10-minute walk.

Last week, my new job and staying in Canberra had gotten off to a good start.

And that Sunday afternoon, things were looking to get even better.